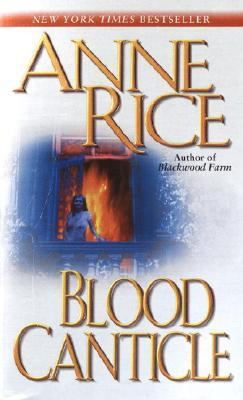 1 I want to be a saint. I want to save souls by the millions. I want to do good far and wide. I want to fight evil! I want my life-sized statue in every church. I'm talking six feet tall, blond hair, blue eyes --. Wait a second. Do you know who I am? I'm thinking maybe you're a new reader and you've never heard of me. Well, if that's the case, allow me to introduce myself, which I absolutely crave doing at the beginning of every one of my books. I'm the Vampire Lestat, the most potent and lovable vampire ever created, a supernatural knockout, two hundred years old but fixed forever in the form of a twenty-year-old male with features and figure you'd die for -- and just might. I'm endlessly resourceful, and undeniably charming. Death, disease, time, gravity, they mean nothing to me. Only two things are my enemy: daylight, because it renders me completely lifeless and vulnerable to the burning rays of the sun, and conscience. In other words, I'm a condemned inhabitant of eternal night and an eternally tormented blood seeker. Doesn't that make me sound irresistible? And before I continue with my fantasy let me assure you: I know damned well how to be a full-fledged, post-Renaissance, postnineteenth century, post-modern, post-popular writer. I don't deconstruct nothin'. That is, you're going to get a full-dress story here -- with a beginning, middle and end. I'm talking plot, characters, suspense, the works. I'm going to take care of you. So rest easy and read on. You won't be sorry. You think I don't want new readers? My name is thirst, baby. I must have you! However, since we are taking this little break from my preoccupation with being a saint, let me say a few words to my dedicated following. You new guys follow along. It certainly won't be difficult. Why would I do something that you find difficult? That would be self-defeating, right? Now, to those of you who worship me. You know, the millions. You say you want to hear from me. You leave yellow roses at my gate in New Orleans, with handwritten notes: "Lestat, speak to us again. Give us a new book. Lestat, we love the Vampire Chronicles. Lestat, why have we not heard from you? Lestat, please come back." But I ask you, my beloved followers (don't all stumble over yourselves now to answer), what the Hell happened when I gave you Memnoch the Devil? Hmmm? That was the last of the Vampire Chronicles written by me in my own words. Oh, you bought the book, I'm not complaining about that, my beloved readers. Point of fact, Memnoch has outsold the other Vam-pire Chronicles completely; how's that for a vulgar detail? But did you embrace it? Did you understand it? Did you read it twice? Did you believe it? I'd been to the Court of Almighty God and to the howling depths of Perdition, boys and girls, and I trusted you with my confessions, down to the last quiver of confusion and misery, prevailing on you to understand for me why I'd fled this terrifying opportunity to really become a saint, and what did you do? You complained! "Where was Lestat, the Vampire?" That's what you wanted to know. Where was Lestat in his snappy black frock coat, flashing his tiny fang teeth as he smiles, striding in English boots through the glossy underworld of everybody's sinister and stylish city packed with writhing human victims, the majority of whom deserve the vampiric kiss? That's what you talked about! Where was Lestat the insatiable blood thief and soul smasher, Lestat the vengeful, Lestat the sly, Lestat the . . . well, actually . . . Lestat, the Magnificent.Rice, Anne is the author of 'Blood Canticle ', published 2004 under ISBN 9780345443694 and ISBN 0345443691.