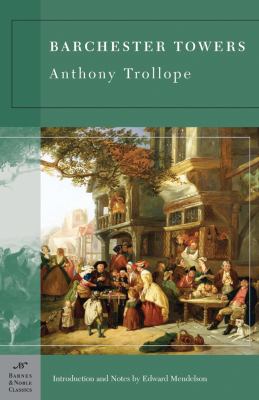 From Edward Mendelson's Introduction to Barchester Towers Barchester Towerspretends to be nothing more than a comic novel about fierce but harmless battles over power, status, and marriage that divide the secure world of an English cathedral town, a place where nothing serious ever happens.Anthony Trollopenarrates his story in a familiar and realistic style, as if he were telling a story after dinner, a style that prompted Nathaniel Hawthorne to praise Trollope's work as "solid, substantial, written on the strength of beef and through the inspiration of ale, and just as real as if some giant had hewn a great lump out of the earth and put it under a glass case."Barchester Towersis one of the greatest comic novels ever written, but it is also much more than that. In its portrait of a small community altered by vast changes in politics, religion, and culture, it is also an ambitious study of the ways in which large forces affect individual lives. And in its account of the anarchic power of sex in the repressed and proper world of an Anglican cathedral town, it rises to the level of myth: It is a story in which the instinctive force of Eros disrupts the civilized order and defeats those who want power rather than love. Trollope can always be relied on for a readable story with a varied cast of plausible characters in a plausible social setting, and for many decades he was valued for the comfort and security that his books seemed to offer. One widely cited example: In England, sales of his novels markedly increased during World War II, especially in times of massive bombing raids over London. Trollope also had a darker edge than he wanted to admit to himself, especially in such later novels as The Way We Live Now, a cynical account of personal and public corruption, and He Knew He Was Right, a story of obsessive and destructive marital jealousy. Even his lighter novels, such asBarchester Towers, are complicated by Trollope's mixed feelings about relations between men and women, about historical and technological change, and about the nature of novel writing itself. Trollope often expresses his feelings about culture, society, and the sexes with table-thumping intensity, but his most intense feelings were always mixed feelings, even if he was not consciously aware of how mixed they were. The love stories in his novels illustrate his way of combining overt simplicity and covert complexity. His love plots almost invariably involve a diffident young man who is too tongue-tied to express his love and a shyly feminine young woman who manages to misunderstand the young man's intentions until almost the last minute, when she accepts in the most modest way imaginable, and then withdraws to exult in private. Trollope repeatedly declares his preference for the reticent, unassertive women suitable to this kind of plot, and equally often declares his distaste for overbearing women such as Mrs. Proudie inBarchester Towersand for the independent-minded young feminists who appear in his later novels. Yet Trollope tends to give his unassertive young heroines at least one moment of assertiveness that he clearly regards as triumphant. Eleanor Bold, the retiring, beautiful young widow in the love plot of Barchester Towers, seems to be the exact opposite of the meddling, finger-pointing, domineering Mrs. Proudie; butt by the end of the book they have both acted against the same enemy (although neither knows about the other's action), and Eleanor has resorted to a small but momentous act of physical violence when defending herself against sexual aggression. Trollope devotes four extravagantly comic paTrollope, Anthony is the author of 'Barchester Towers ', published 2005 under ISBN 9781593083373 and ISBN 1593083378.