Asking for It: Ellora's Cave 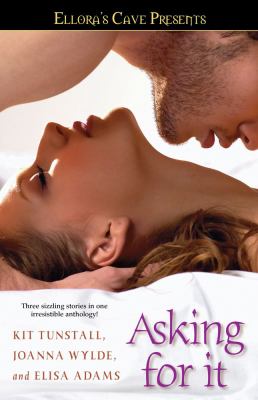 One Black smoke billowed down the hallway, obscuring Nick's view through his face shield. His peripheral vision tracked two teenagers in the Westbridge Academy's conservative uniforms hurrying toward the exit, clutching hands and sobbing. He thought about stopping the girls to ask if they had seen anyone else left in the building, but the air of panic surrounding them indicated they wouldn't be responsive. Seeing they required no assistance, he and his partner moved on, Paula taking the lead. As they progressed down the hallway, the smoke thickened, settling lower to the floor. He reached for his SCBA automatically as they checked each classroom, quickly but methodically. At the last room in the hallway, where the fire had originated, Nick and Paula stepped inside, dropping to a crouch as they moved through the room, searching for anyone remaining. His low vantage point allowed him to avoid the thickest concentration of the acrid smoke and improved his visibility. The room appeared to be a science lab containing several long black tables with three chairs at each. All of the tables were bare of the clutter of academic paraphernalia, indicating either everyone had grabbed their belongings, or no one had been in the room when the fire started. Under that assumption, he didn't expect to find anyone but indicated with a hand signal to Paula that he was checking the adjoining lab, as procedure dictated. With Paula behind him, he entered the second room, and his heart stuttered when he saw someone lying facedown on the floor in the corner. Nick moved closer at a rapid pace, identifying the form of a woman when he knelt beside her. As Paula joined him, he rolled the woman onto her back and lifted her in his arms, not taking time to check her vitals. She settled over his shoulder easily. The woman was a negligent burden on his way from the building, and he emerged into fresh air seconds later, his partner close on his heels. Paula broke off to rejoin the group of firefighters gathered round the engine. Nick went straight to one of the ambulances, where an EMT waited to care for her. He lowered the woman onto a waiting stretcher and stripped off his SCBA then pushed back his face shield, preparing to find his chief to inform him the building was clear. Nick's eyes fell on the face of the woman, and he caught his breath. Even the black smudges couldn't disguise her finely honed features. With olive skin and dark brown hair, she was a striking contrast to the crisp white sheet and pillow on the gurney. Her eyes opened as the EMT slipped an oxygen mask over her face. The rich brown color reminded Nick of pools of molten chocolate. The bewilderment in them made his heart ache. Without removing his elkskin gloves, he took her hand and squeezed gently. "Everything's going to be fine, ma'am." For a long second, her gaze didn't waver from his. Nick had the sensation she was peering into his soul. He squirmed at the thought, breaking eye contact when he caught sight of the chief. It was a struggle to release the woman's hand, much to his surprise. Glancing down once more, he saw her eyes had closed again. The sound of her harsh coughing remained with him as he made his way to Brady, the chief. Her frightened eyes haunted him, and it took all his willpower to push away thoughts of her and return to the business at hand. Never had he experienced such a connection in such a way, and the woman's image stayed with him as he rejoined the rest of the crew extinguishing the fire. Breathing hurt. Coughing hurt even more, but Miri couldn't stifle the urge. The oxygen provided some relief from the burning, acrid sensation in her throat and lungs but didn't repress the reflex to clear the congestion. She was vaguely aware of the EMT hovering beside her, monitoring her vitals every few minutes, but couldn't manage to converse yet. Her throat was too raw. Even the thought of speaking made her wince. TheWylde, Joanna is the author of 'Asking for It: Ellora's Cave', published 2008 under ISBN 9781416577614 and ISBN 1416577610.