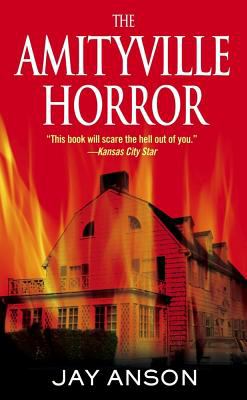 Chapter One December 18, 1975 George and Kathy Lutz moved into 112 Ocean Avenue on December 18. Twenty-eight days later, they fled in terror. George Lee Lutz, 28, of Deer Park, Long Island, had a pretty good idea of land and home values. The owner of a land surveying company, William H. Parry, Inc., he proudly let everyone know that the business was a third-generation operation: his grandfather's, his father's, and now his. Between July and November, he and his wife, Kathleen, 30, had looked at over fifty homes on the Island's South Shore before deciding to investigate Amityville. None in the thirty to fifty thousand dollar range had yet met their requirements -- that the house must be on the water and that it must be one to which they could move George's business. In the course of their search, George called the Conklin Realty Office in Massapequa Park and spoke to broker Edith Evans. She said that she had a new house that she wanted to show them, and that she could take them through the place between three and three-thirty. George made the appointment and the broker -- an attractive, warm woman -- took them there at three in the afternoon. She was very pleasant and patient with the young couple. "I'm not sure if this is what you're looking for," she told George and Kathy, "but I wanted to show you how the 'other half' of Amityville lives." The house at 112 Ocean Avenue is a big, rambling, three-story affair, with dark shingles and white trim. The lot on which it stands is 50 by 237, the fifty feet facing the front, so that as you look at the house from across the street, the entrance door is down the right side. With the property comes thirty feet of wooden bulkhead that stands against the Amityville River. On a lamppost at the end of the paved driveway is a small sign bearing the name given the house by a previous owner. It reads "High Hopes." An enclosed porch with wet bar looks out at a preferred, older residential community of other big homes. Evergreens grow around the narrow grounds, partly blocking off the neighbors on either side, but their drawn shades can be seen easily enough. When he looked around, George thought that was peculiar. He noticed the neighbors' shades were all drawn on the sides that faced his house, but not in front or in the direction of the houses on the other side. The house had been on the market for almost a year. It was not in the paper, but was fully described in Edith Evans's agency listing: EXCLUSIVE AMITYVILLE AREA -- 6 bedroom Dutch Colonial, spacious living room, formal dining room, enclosed porch, 3-1/2 baths, finished basement, 2-car garage, heated swimming pool and large boathouse. Asking $80,000 Eighty thousand dollars! For a house described like that in the listing, it would have to be falling apart, or the typist could have left out a "1" before the "8." One might think she'd want to show a suspect bargain after dark and from the outside only, but she was glad to show them inside. The Lutzes' examination was pleasant, swift but thorough. Not only did it meet with their exact requirements and desires, but contrary to their anticipations, the house and other buildings on the property were in fine condition. Without hesitation, the broker then told the couple it was the DeFeo house. Everyone in the country, it seems, had heard about that tragedy, the twenty-three-year-old Ronald DeFeo killing his father, mother, two brothers, and two sisters in their sleep on the night of November 13, 1974. Newspaper and television accounts had told of the police discovering the six bodies all shot by a high-powered rifle. All -- as the Lutzes learned months later -- were lying in the same position: on their stomachs with their heads resting on their arms. Confronted with this massacre, Ronald had finally confessed: "It just started; it went so fasAnson, Jay is the author of 'Amityville Horror', published 2006 under ISBN 9781416507697 and ISBN 1416507698.