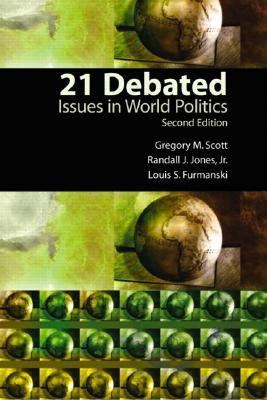 The thousands of topics available in world politics pose a challenge for anyone assembling a sample, as in this book. Problems in the Middle East and the .war on terror" would themselves be sufficient to fill many books. This book, therefore, is not comprehensive, but it does include a sample intended to whet your appetite for a lifetime of reading about world affairs. If you are reading this preface, you are probably a college student taking a course in world politics, foreign policy, or international relations. You may already know a good deal about global politics, or you may not have paid much attention thus far. You may be unaware of how many important issues are currently shaping the global, political, and economic environment. As today's citizen of the world and perhaps tomorrow's leader, you have a role in determining how these issues shape your future. In order to grasp the importance of some of these issues, imagine a day in the life of a U.S. president who has turned from pressing domestic concerns to problems that may have a significant long-term effect on the nation's future. A presidential meeting with the National Security Council might feature an agenda containing the following items: Plan to stop al Qaeda Discussion of nuclear weapons proliferation Proposal to allow Turkey to join the European Union Plan to guard against terrorist attacks on U.S. embassies Resolution to reduce opportunities for Americans to become mercenaries Resolution to impose a tax on imported computers Response to expansion of the European Monetary Union (EMU) Request to increase the U.S. allocation to the International Monetary Fund (IMF) Decision on how to proceed with Iraq Request for a study of the strategic implications of global warming Request for assistance to several African countries to help reduce the spread of AIDS The items listed above would make for a full agenda, to be sure, but they would by no means exhaust the number of foreign-affairs concerns deserving attention. But where do you begin to grasp the complex web of issues that confront ambassadors, statesmen, international corporations, and nongovernmental organizations (NGOs) every day? This book can be more than just a course requirement; it can, in fact, help you get started in your quest to become familiar with the world's problems and opportunities. Obviously, this book does not cover all world issues, nor does it address all aspects of any particular issue. The length of the book imposes a further limitation: The text is presented in a debate format, with one author on each side of an issue, whereas, in reality, every major social and political issue is complex, and many sides may develop in the process of an issue's resolution. This book does, however, point you in the right direction by introducing you to twenty-one of the most controversial and important issues facing the world's governments today, which are discussed by some of the world's most thoughtful commentators. Although the debate format is most often used, sometimes two different perspectives and approaches to an issue are presented rather than two directly opposing viewpoints (e.g., Issue 1, globalization). It is unlikely that any single article will allow you to resolve conclusively for yourself any particular issue, but that is not our purpose. As editors we have, from the start, had in mind three objectives: The first is to pique your interest in the issues themselves. You may have already heard so much discussion on some of the issues that you think that nothing of interest can still be said. If this is the case, we hope to surprise you with some creative thought and good writing. Our second objective is to provide you with some of the basic information that is needed to begin to develop your own informed opinions. The articles in this book provide a great many facts aScott, Gregory M. is the author of '21 Debated Issues in World Politics Issues in World Politics', published 2003 under ISBN 9780130458292 and ISBN 0130458295.